On December 8, 2022, Justice Tracie L. Brown, from the First District Court of Appeal, visited the Bartko offices to swear in Taylor Yamahata as a member of the California Bar.  Justice Brown is a graduate of Harvard College and UC Berkeley School of Law.  After 5 years of private practice and 10 years with the United States Attorney Office, in 2013 Justice Brown was appointed as Judge of California Superior Court, focusing on Domestic Violence issues.  In 2018, Governor Brown appointed Justice Brown to the First District Court of Appeal, Division Four.

Taylor Yamahata graduated from Dartmouth College, and then attended Northwestern’s Pritzker School of Law, graduating in 2021.  She clerked for one year for the Honorable John Ehrlich in the Law Division of the Circuit Court in Cook County, Chicago, and joined Bartko in September 2022.  Ms. Yamahata is a member of the Illinois and California Bars, and practices in the areas of Business Litigation. 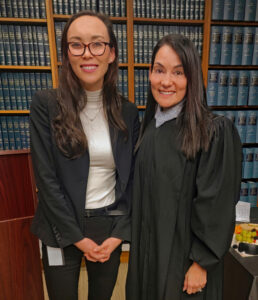